The Buddha, Pa Auk Sayadaw, and Ajahn Brahm walk in to a Jhāna juice smoothie bar...

Before we begin that tale, first a little background information.

They sit down to talk about the proper way to attain the fire of  first jhana, expanding on the simile of AN 7.67

In contrast, fourth jhana is compared to the fortress inhabitants stocked with ghee, butter, much higher order level of energy, time, resources to develop, compared to drinking water and fire wood of first jhana, and third jhana is compared to among other things, beans, which will be referenced as the subject of this article.

Important implication from AN 7.67 jhana similes:

comparing the firewood of first jhana, to the ghee and butter of 4th jhana, the implication is clear.

grass to feed horses, firewood to keep you warm, these are basic necessities of survival correlated with first jhana.

First jhana in the suttas is much easier than you think, much easier than Vism. makes it out to be. Especially see the suttas of that linked article showing how easily newly ordained bhikkhus, 500 laypeople, and even 2 million lay people attained first jhana. In stark contrast to Vism.'s claim that only 1 in a million earnest meditators can attain first jhana.

The fortress inhabitants of AN 7.67 are newly ordained bhikkhus and even lay people. As easily as they can obtain firewood, grass to feed horses, that's how easily the Buddha expects them to be able to attain first jhana. He specifically designed it that way. In contrast, the grains and beans of 3rd jhana require land, massive amounts of water, years of time, service animals and the feedstock for them, to produce.

So clearly there is a gradual training from first to fourth jhana, and fourth takes much more time and skill to refine to produce, than first. In contrast, Pa Auk and Ajahn Brahm, almost no one can do first jhana (compared to the numbers of people who attempted in earnest and failed), but those who can do their version of "first jhana", within a short time of a week or two, they can attain fourth jhana. Does that sound gradual to you? Does there seem to be meaningful differentiation between first and fourth jhana?

So according to the Buddha's first jhana simile of AN 7.67, with first jhana being firewood, drinking water, grass for the horses, these are basic necessities of survival. If you don't have that, you can't survive in the fortress for more than a week or two. He designed first jhana to be attainable by all, newly ordained novices, and lay people supporters working in the fortress.

If Vism. and Ajahn Brahm's version of  "first jhana" is true, "only 1 in a million can find water, firewood, grass", then all the inhabitants of the fortress are going to quickly die. Or they're going to disrobe and leave their training system of "jhana" in frustration.

Now we return to our main story, understanding it's an expansion on the firewood of first jhana simile of AN 7.67.

The Buddha, Pa Auk Sayadaw, and Ajahn Brahm walk in to a Jhāna juice smoothie bar...

"The firewood of first jhana, its purpose is to warm the body (kāya and rūpa, both in context referring to the anatomical physical body of meditator), so they can not only be warm, comfortable and happy, but healthy enough to meditate in a way that subtle energy channels open up, expand, and the power of discernment in their mental faculties increase exponentially, and they can penetrate into the nature of reality and realize nirvana.

"the gas fluid lighter and fire kindling I have provided represents vitakka and vicara."

"Blessed one, that can not be. For in the suttas, you say the breath body is a body among bodies. Therefore, first jhana has nothing to do with the physical body of the meditator. One has to detach the mind from the body, and use the nimitta of the breath body as a way into the fire of first jhana.

"Vitakka and vicara can not mean thinking and pondering, for those are coarse activities that even novice monks and lay people can do. Does the vinaya not say that first jhana is an uttari manussa dhamma, a superhuman attainment? Any ordinary human can think, but only trained meditators can cease discursive thinking. Therefore vitakka must mean placing the mind on the breath nimitta, and vicara must mean keeping it connected to the nimitta."

"The proper way to light the firewood of first jhana, is not with a fluid lighter and fire kindling, as the Blessed one claims, because any ordinary person can learn to do that easily.

"The correct definition of vitakka and vicara in this simile, is that one eats a pot full of beans, emits methane, and using a book of matches, one then lights the methane on fire on top of the fire wood, without kindling, and  emits methane as  many times as needed before the fire wood can sustain itself. That is vitakka and vicara jhana wobble I talk about. When the match flame ignites the puff of methane, the center of that explosion is the brightest part of the nimitta, and one enters first jhana from there, switching from the perception of methane fire nimitta, to the bliss of the  release of methane relieving strong pressure in the body. The bliss of being free of bean exhaust is the one pointedness of jhana.

"No Ajahn Brahm. You are teaching a dark jhana! The one true perception of first jhana is the visual nimitta of the bright methane explosion kasina, not the bliss of methane exhaust release. There are 7 javana impulsions following the methane explosion that one then enters appana methane samadhi.  The problem with you is you don't recognize the authority of Abhidhamma. The Buddha taught Abhidhamma to his mom in the deva realm and Sariputta and anything it says supersedes what the Buddha said in this jhana juice bar and the suttas.

(The Buddha looks on incredulously)

"Ajahn Brahm you are correct that vitakka and vicara is not thinking and pondering, and kāya and rūpa are not the meditator's physical body, for as the Blessed one said, the methane breath body is a body among bodies, and that is the true uggaha nimitta, and the visual counterpart image of that methane explosion, not the offensive smell, nor the explosive sound of releasing methane, is the true patibagha nimitta of first jhana.

But pari mukha here means, around the entrance, and the entrance is the orifice in which the methane is emitted from the body. It's very very important that the meditator's spatial focus must be exactly at this methane emission spot, and the firewood lined up at the same spot. It has to be pointy enough to be considered one pointed concentration.

And you are weak for giving your followers a pot full of cooked beans.

We give our meditators a bag of dried beans. (Note dry beans are hard to cook before you have fire! But eating dry beans can still produce methane, it just takes longer and causes more pain)

(Also notice the beans in AN 7.67 are the product of 3rd jhana! So Ajahn Brahm and Pa Auk sayadaw is requiring the skill level of 3rd and 4th jhana as the prerequisite to certify a proper "first jhana" in their system! In suttas such as AN 6.29, the perception of light is correlated with the stage between 3rd and 4th jhana)

"Well Sayadaw, I seem to be able to light my methane emissions from up to two feet away from the parimukha emission spot, anywhere there is enough concentration of methane. So much for your pari mukha theory."

The Buddha turns to Ananda says, "I've had it with these two. You deal with them." The Buddha gets up and leaves the Jhana juice smoothie bar.

Ah, the bliss of One pointed appana methane samadhi 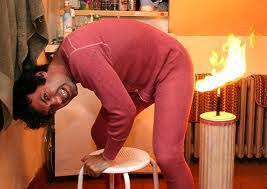 🛇👻 The four Jhānas are not formless samādhi attainments

Not formless means you have physical body 🗸🏃‍♀️ awareness, you can feel leg pain, you can hear sounds. In 3rd and 4th jhāna, the sense of the body may subjectively be experienced as increasingly subtle, fading out. But if you can no longer hear sounds, can not kinaesthetically locate where your hands, feet, head are, have no sense of direction of up and down, then you've crossed over into formless samādhi, and you are no longer in the four jhānas.﻿• rūpa is not a-rūpa, 4 jhānas operate in rūpa: You think that would be obvious, but it's not a well understood point, thanks to late Theravada propaganda redefining 4 jhānas as formless (see VRJ🐍 and Jabrama🤡-jhana).

The author seems to be overly critical of both Buddha's buddies. We are all friends here Pa Auk Sayadaw and Achan Brahm both need a bit of an adjustment, but this is scathing and not al all friendly.

Funny, yes in a western Buddhism's competitive way, but this is not the way of the Buddha Dhamma.

If anything, I made every effort to be gentle and grounded in just the facts.

Underneath the satire there is definitely critical analysis of the differences between Early Buddhist suttas, Abhdhamma, etc.,

but "scathing", and "competitive buddhism", is just a creation of your perceptions.

What you really should be asking is this: does Ajahn Brahm and Pa Auk follow this sutta?