Where do Jedi's come from?

Where do Jedi's come from?

What was the inspiration behind Star Wars?

George Lucas has stated that Star Wars Episode IV: A New Hope was heavily influenced by Akira Kurosawa's The Hidden Fortress. His original plot was similar to the plot of this movie.

The Hidden Fortress (隠し砦の三悪人 Kakushi toride no san akunin, literally, "The Three Villains of the Hidden Fortress") is a 1958 jidaigeki[3] adventure film directed by Akira Kurosawa, about samurais.

What were the samurai values?
The "way" originates from the samurai moral values, most commonly stressing some combination of sincerity, frugality, loyalty, martial arts mastery, and honour until death.

Why did Zen Buddhism appeal to the samurai?

Reasons. The primary reason samurai adopted Zen Buddhism was the belief that it strengthened them on the battlefield. They believed that plans and strategy on the battlefield led to death, and Zen helped followers dismiss such thoughts.

What is Zen?
The term Zen is derived from the Japanese pronunciation of the Middle Chinese word 禪 (Chán),

What is 禪 (Chán)?
which traces its roots to the Indian practice of dhyāna ("meditation").[note 1] Zen emphasizes rigorous self-control, meditation-practice, insight into the nature of things (Ch. jianxing, Jp. kensho, "perceiving the true nature"), and the personal expression of this insight in daily life, especially for the benefit of others.[4][5] As such, it de-emphasizes mere knowledge of sutras and doctrine[6][7] and favors direct understanding through spiritual practice and interaction with an accomplished teacher.[8]

What is Jhāna?
In EBT (early buddhist teaching), jhana means meditation. The word jhana unqualified, has a broad range of meditation skill level and topics, including learning jhana quality, impure jhana quality, and even wrong jhana quality. All are called 'jhana'. The 4 jhanas,  are 4 quality levels with specific benchmarks to meet that level of quality.

What can you do with a High quality 4th Jhāna?
These 4 jhanas quality benchmarks are a gradual training to ensure one's samadhi, stability of mind in undistractible lucidity, is sharp and penetrating enough to realize Nirvana.

What are fun side effects of a High quality 4th Jhāna?
When you have high quality samadhi, whatever you want to do, whether spiritual, practical, artistic, martial,  you will be able to do with superior quality, even  superhuman feats. 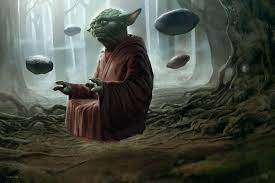 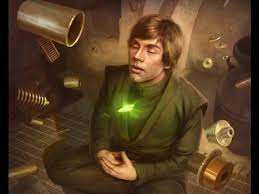 Interesting coincidence (or not?)
Yodha in Pali = Warrior.
Jedi sure looks a lot like Jhāna.


While standing, walking, sitting, or lying down, Yodha is in Jhāna. 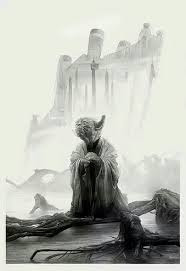